I’ve spent my time as an Andrew Mellon fellow working with Ashe Cultural Arts Center- a cultural center in New Orleans whose mission is to showcase the culture and contributions of people of African descent throughout Africa and the diaspora. Ashe’s mission fell totally in line with my own interests and research. My research as a Ph.D. anthropology student looks at conceptions of religion and spirituality in the three major religions of southern Benin Republic- Vodun, Christianity, and Islam. As a Mellon fellow I worked with Ashe to put together a country pavilion on Benin Republic in November 2019. This pavilion consisted of a lecture by me, an art exhibit, fieldtrips for groups of school children (including storytelling, crafts, and dance classes), the compiling of an educational pamphlet on the country for all exhibit visitors, and West African cuisine. The pavilion also made a space for an exhibit on the Benin Empire- which was located in what is now Nigeria- but is often confused with Benin Republic by many. My project at Ashe also relates to my academic research because I spent a fair amount of time during my preliminary doctoral fieldwork in Benin in summer 2019 learning about and procuring- for the exhibit- common items which were very representative of daily life in Benin. The bits of everyday knowledge that I learned during this artifact acquisition process will be helpful during my future, long-term fieldwork.

Beninese mat for sitting and sleeping.

Section of the exhibit on the legacy of slavery in Dahomey and Benin Republic.

Section of the exhibit on spirituality.

Section of the exhibit on home life.

Section of the exhibit on entertainment.

Crafts created by school children during a fieldtrip. 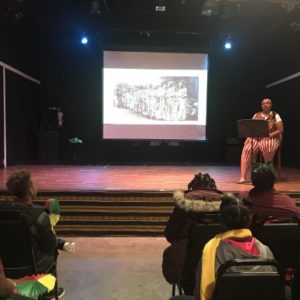 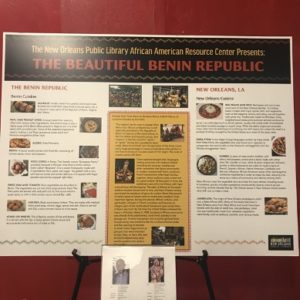 The New Orleans Public Library highlights some of the elements of Beninese culture that can be found in Louisiana.

January 29, 2020
ofrazerwp
We use cookies to ensure that we give you the best experience on our website. If you continue to use this site we will assume that you are happy with it.Ok